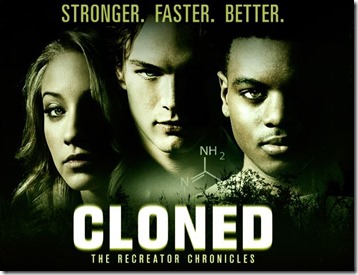 Check out the trailer for Gregory Orr's sci-fi thriller “Cloned” the opening chapter in a sci-fi franchise about identity and the threat of replacement scheduled for release on April 23rd 2013. The film stars Stella Maeve, Alexander Nifong, Jamal Mallory McCree, John de Lancie and Laura Moss. “Cloned”is a teen-orientated suspense film with roots in science-fiction realism and psychological terror. It merges the anxious paranoia of Invasion of the Body Snatchers with the killer-next-door quality of Disturbia and the teenage angst of the Twilight series.

Three friends on a camping trip discover a secret laboratory and accidentally trigger a deadly experiment that creates their clones--superior duplicates who plot to kill the teens and take over their identities. The film is the creation of award-winning filmmaker Gregory Orr, who grew up in the shadow of the movie industry. Both his father and his grandfather worked at Warner Bros. (the former was TV producer William T. Orr, and the latter was studio chief Jack Warner,) and his mother was an actress, whose film debut at age 18 was as the Bulgarian refugee Annina Brandel in Casablanca.

“Unlike most people I fell in love with movies not at the movie theater, but on a movie set,” says Orr who is making his feature debut with “Cloned”, after many years producing documentaries for A&E, History Channel, AMC and France’s Canal+. “I witnessed first hand the cooperative nature of a film crew and how it prepared the environment for actors to play a scene.” The film was awarded Best Picture at Philadelphia's Terror Fest, and received its UK premiere in April 2011 at the Sci-Fi-London film festival, where Empire magazine called it, "A witty twist on the mad scientist and teens in peril scenario (and) an eminently enjoyable romp that more than merits a sequel."