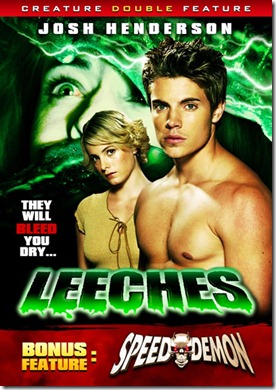 When a college swim team begins using a powerful new steroid to enhance their performances, their dip in a leech filled lake produces foot long blood suckers after feeding off the fit young men. Soon the entire campus is under siege as the hungry critters make a smorgasbord of the student bodies. LEECHES!, starring 2012 DALLAS star Josh Henderson, and soapsters Matt Twining (ONE LIFE TO LIVE) and Charity Rahmer (DAYS OF OUR LIVES), was directed by David DeCoteau and written by Fangoria magazines’s Michael Gingold. LEECHES! is celebrating its 10th Anniversary on a Letterboxed special edition DVD with a making of, on-camera interviews with DeCoteau and FX creator Jeff Farley, never before seen footage, blooper reel, photo gallery and a commentary track with the director and writer.

SPEED DEMON, also celebrating a decade of fright. When a gang takes over a southern California community, a mysterious driver with a demonic hood ornament appears, taking out the gang members one-by-one.