My Review Of “Tinsel” Horror Short 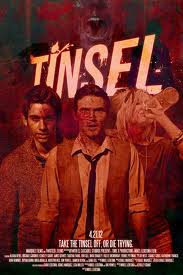 “Tinsel” is one hell of a Christmas Nightmare with one hell of a creepy killer twist. Directed by Mikel Ledesma the story follows Sarah who is plagued with nightmares as a child about the Tinsel Killer. Years later the nightmare becomes real and Sarah’s brother and friends fall victim in this blood soaked slasher flick.

This is one of the coolest horror shorts with one of the best dark nightmare opening scenes I have seen in a long while. There is a seductive and disturbing energy to the film that is provided by a nice soundtrack. The special effects in “Tinsel” are as good as indie low budget horror can get. The director manages to pack a feature length gorefest into a 36 minute punch both entertaining and horror filled.
“Tinsel” has a few things that make a horror hole poker sing out. I won’t pick at the minor oddities about this film that bothered me because there was so much intensity and awesome storytelling here to keep me entertained. This is a great short film and a killer Holiday nightmare for a fan of Christmas carnage films.

Check out “Tinsel” on Facebook
Posted by A Southern Horror Fan