Directed by Kantz “Wasteland” is in post production and due out sometime this year. 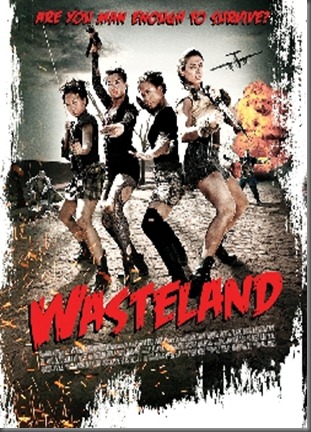 It's the near future and we've finally done it. The chemicals that we have been pumping into the environment have caused our ecosystem to fail and collapse. Known as 'Black Sunday', hundreds of dust storms or 'Black Blizzards' occurred throughout the World First it was the land to go barren, then it was the animals who were brought to the edge of extinction and finally the death toll of man is in the hundred of millions. Keo Tanaka and his family are trying to adjust to this world gone wrong when group of religious zealots, simply named The Church, pay them an unwelcome visitor. Brutalized and tortured, The Church lead by the enigmatic Caine, leave him and his wife for dead and carry his son off for some unholy purpose. Now it’s 17 years later and the world has only gotten worse. Cannibalism has spread like wildfire and Scavengers, Mutants and unknown horrors that lurk beneath the sand are now threats of everyday life. Still alive and hardened by years of searching, Keo has finally come close to finding The Church and exacting his revenge. First he must make it through all the horrors the Wasteland has in store for him. “WASTELAND” is a non-stop sci-fi adventure of a man who has lost everything and what he will endure for a little piece of mind.
Posted by A Southern Horror Fan