Abraham Lincoln: Vampire Hunter is a 2012 American 3D supernatural horror film based on the 2010 mashup novel Abraham Lincoln, Vampire Hunter. The film is directed by Timur Bekmambetov and is produced by Bekmambetov and Tim Burton. The novel's author, Seth Grahame-Smith, wrote the adapted screenplay. The real-life figure Abraham Lincoln, the 16th President of the United States (1861--1865), is fictionally portrayed in the novel and the film as having a secret identity as a vampire hunter. Benjamin Walker stars as Lincoln. Filming began in Louisiana in March 2011, and the film is being produced in 3D. It is scheduled to be released on June 22, 2012. 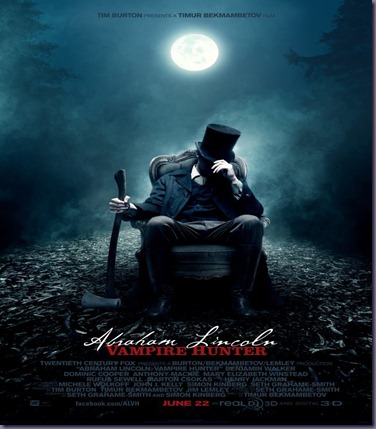 Synopsis:
Abraham Lincoln: Vampire Hunter explores the secret life of our greatest President, and the untold story that shaped our nation. Visionary filmmakers Tim Burton and Timur Bekmambetov (director of Wanted) bring a fresh and visceral voice to the blood-thirsty lore of the vampire, imagining Lincoln as history's greatest hunter of the undead.
Facebook page
twitter
Posted by A Southern Horror Fan