My Review Of "Bane: An Experiment In Human Suffering". 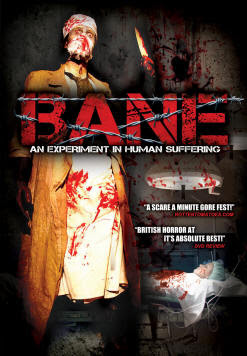 "Bane" is a dark journey through the intense emotional levels of the human psyche. From the moment the opening credits begin the story unfolds with shear abstract force and does not let go of you until the final moments of the film. It starts as four women find themselves locked away in a hidden research facility with amnesia. As they become aware of their situation, filled with fear and confusion, the director pulls you in with a symphony of eery and dark music setting the tone for an emotional roller coaster holding you to the every changing images flashing before your eyes.
At times you are reminded of Dario Argento as the film flashes from disturbing visual effects and psychological horrors that send the protagonists into terror and panic. Then the film gently unfolds further into direct French noir influences by casting force-fed slanted visions of shadow and light demanding your focus with blunt and hypnotic contrast. The blend is seamless as the characters deal with cold sterile experiments and nightmare visits from a mysterious figure called the "Surgeon". A bogeyman that combined with the harsh disconnected scientists in an aseptic environment is 100% British Indie at it's best.
The whole movie keeps you confused and emotionally invested as the women are tortured during a constant episodic journey. The lack of information given to you as the the viewer is completely intentional and well worth it. You are forced to go along on the nightmare trip completely in the dark until the last moments of the film.
For me "Bane" is able to mold cult gore and horror perfectly as only the British mind can and keep the film comprehensible. The beauty of this is done through the dark emotional music. It pulls you into the scenes and you don't care if you have no clue what or why this is all happening. You love it! At least I did. If I rated films I would give this one 3 1/2 out of 5. My only issue with the film is the long wait until the final reveal. I would have liked to see the mysterious creature shown earlier on in the film but all in all "Bane" is a really well written and executed gory nightmare. The movie does require your complete attention so if you are overly American in your viewing experience and require pictures to be "dumbed-down" or simple then this film is not gonna do it for you. It does what horror films did in the genre's beginnings- keep you guessing right until the last breath of the story.
Bane comes from Chemical Burn Entertainment and hits the streets 4/10/2012. If you want more info on this film check out www.chemicalburn.org .
Posted by A Southern Horror Fan