Nothing Is More Merry Than Mass Destruction…Sleigh Bells Are Blazin’ bitches This Christmas Season.


Check out this Russian Art Poster For “The Darkest Hour” an epic Alien invasion story that is setting humanity on the extinction trail  Christmas Night! Technically the invasion focuses on Moscow, beautiful city-blah-blah-blah…But the upside is we don’t have to endure another “oh my god!” what will we do Hollywood is in ruins-How will mankind survive” attacks. Seen three within the last year. So I for one am glad to see a new part of the world go out in a blaze of whimpering impotence  against a far superior creature- Man’s paranoia-no I mean Alien Invasion. It’s coming so really not something I should be joking about! What can ya do …stock up supplies and dig a hole and ride out the maelstrom of chaos!

Oh the real reason I wrote this post is to mention all the images at Dread Central! 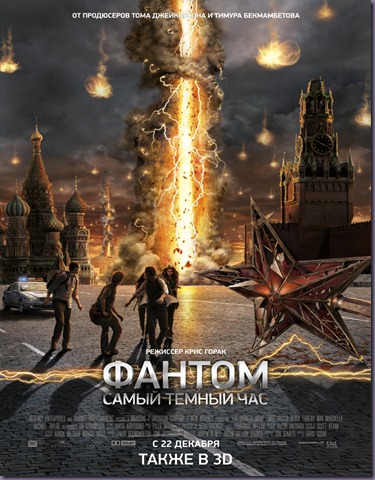 Synopsis:
The Darkest Hour, starring Emile Hirsch, Rachael Taylor, Olivia Thirlby, Max Minghella, and Joel Kinnamana, is a new film about five young people who find themselves stranded in Moscow, fighting to survive in the wake of a devastating alien attack. The 3D action-thriller highlights the classic beauty of Moscow alongside mind-blowing special effects from the minds of visionary filmmaker Timur Bekmambetov (Wanted, Night Watch) and director Chris Gorak.
Posted by A Southern Horror Fan