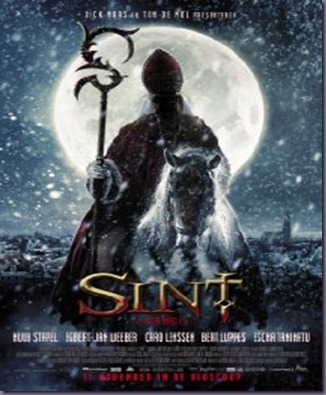 So as an ongoing Christmas tradition I have been adding Christmas and Holiday based horror into my routine of baking candies and cookies and gluttony as well as classic Christmas cartoons. Well last night I sat down and watched Dick Maas’ “Sint”. Here is what I thought of the film.

A fricking great story of Sinterklauss like never before! The whole celebration period around Dec. 5th tradition of having towns people dress as St. Nick and “Black Pete” a character that would never fly in American culture!.Black Pete is basically white people in black face traipsing around town creating tom foolery as they accompany Saint Nicholas.

Now here is were things get scary (Major Spoilers … ) This saint isn’t as much as a savior as he is a demonic carnivore bend on raising a bloody holy apocalypse on the poor city of Amsterdam. He is undead, cursed and out for vengeance and you better lock your fucking doors and cement in your fireplace and lurn to slow your breathing to near death rates! He will get you and your children.


I can honestly say that this story held my attention the entire time, well there was a brief moment when dear ole Nick was m.i.a in the film and it was more of a “find the bomber” type situation but very minimal amount of time. Soon the carnage began again. Oh and this slayer is very non discriminant in who he kills = Adults, teens and yes there is the splatter and screams of little children. “Sint” offers a very equal opportunity slayerific experience.

The story was common as any other holiday horror. Promiscuous youths, urban legend and set ups familiar to any horror film. This film however is in the middle of a very active and modern city of the world and has moments were it is more like a “Mission Impossible” film than a slaughter film. Very reminiscent of when Jason took Manhattan. Some go almost unnoticed by the evil saint while others seem to be dead in his sites at all cost.

This is a really good holiday film that offers more to any horror fans Christmas tradition. So if a Saint Nicholas eating and killing children and terrorizing town folk is right up your Evil Santa and Krampus parade filled affair then check this film out. However be warned your options are this – subtitled or dubbed in English. I chose the dubbed but think I would have experienced it more intensely in subtitle form.