True Blood’s Alcide, Joe Manganiello has been in New York doing interviews, among other things...

The type of stranger approaching Joe Manganiello on the street has changed recently, from devotees of the CW’s One Tree Hill (an apparently fanatical and legion population), on which he played bartender Owen for two seasons, to rabid True Blood fans eager to get close to Manganiello’s latest character, the werewolf Alcide Herveaux
During a visit to New York, Manganiello found time to talk to us about the thrill of being cast on his favorite show, and his tips for playing a werewolf, which include ab work and connecting with your inner child.
MCKENNEY: Tell us a little about your audition process for True Blood. 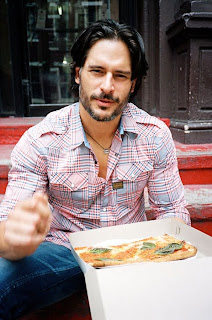 MANGANIELLO: My first audition was for a different werewolf role–it was me, ten inches away from the casting director, growling in her face. It felt great. They called me back in and said they wanted me to read again, but this time for the part of Alcide. Since I was a fan of the series and had already read all the books, I knew this was a bigger role, and was totally overwhelmed when I got it.
MCKENNEY: Werewolf and vampire roles have gotten so ubiquitous that I’ve heard there are classes in L.A. that specialize only in this type of acting. How would you teach Werewolf Acting 101?
MANGANIELLO: I mean, I feel like I’ve been pretending I was a werewolf since I was a little kid. But it takes work. It’s about dialect work… I’m not going to lie–it’s about going to the gym. It’s a lot about letting it all go, remembering when you were a crazy primal kid running around and screaming. I wouldn’t tell anyone to study werewolves–I studied wolves, how they moved, their tendencies and sensibilities.
MCKENNEY: Originally, you were only meant to be in six episodes, but Alan Ball expanded your role for the fourth season.
Posted by A Southern Horror Fan