My Review Of "For Jennifer" 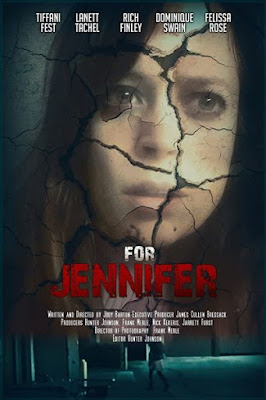 After a surprise horror themed birthday party, Jennifer gets a scare that leads to an accident. Jennifer is a horror blogger and huge horror movie fan. Her friends, to cheer her up after the accident, decide they could make a movie. They collect their gopro cameras and phones and begin to shoot. Soon, the discoveries of other low budget horror films similar to theirs begin to intersect with their own movie. This sends Jennifer on a journey to understand where these other "Jennifer" films came from. The journey leads to a discovery about the films she could never have imagined, and she realizes her participation has put her life, and the lives of her friends, in real danger. A danger they have to endure, whether by choice or not ... if they want to make a good horror movie.


"For Jennifer" technically is a sequel to the 2013 jaw-clinching intense horror "To Jennifer", but it is meta enough to stand independently- in case you haven't seen the aforementioned flick. Told in a mock documentary style the story keeps with the original concept of extreme obsession that leads to a deadly end. This time the obsession is making a horror movie based on a faux film about the original film that went horribly wrong.

No personally, even though I enjoyed this film, it didn't have that dark, nightmarish realism that "To Jennifer" had. This is a good sequel in the sense that the narrative moves the franchise forward, creates a new story line, and possibly sets things up for more sequels. There is more twisted humor in "For Jennifer" that reminds me of later 80's horror .

The acting is pretty decent. The cast seem to know there characters and feel authentic. And like I said earlier, the story is fresh enough that it moves things in the franchise forward. That doesn't mean that the concept is totally original because a lot of the concept has been done before in found footage/mockumentary format. Still it is done well enough that it is entertaining.

The horror elements in "For Jennifer" comes later in the film but the body count rises in a bloody gory finally. The film's atmosphere is typical documentary style build up, creating an anticipation. Whether or not the playoff is worth it will depend on individual viewers. I personally thought it was worth the wait and since the practical effects were done with quality I enjoyed the last act a lot. "For Jennifer" is worth the watch, it isn't "To Jennifer" but it isn't really trying to be. (3/5)
Posted by A Southern Horror Fan