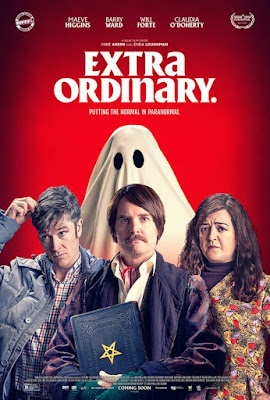 Upcoming horror comedy "Extra Ordinary" has announced March release details. The film, directed by Mike Ahern, Enda Loughman, will show on March 6th, in theatres. The Cranked Up website shows the film playing in dozens and dozens of U.S. cities. From Phoenix to Brooklyn, this title will show coast-to-coast. In Canada, Level Film is handling this title's release. On March 13th, "Extra Ordinary" will show in Canadian cities, followed by a release on Digital - this June.

The film stars Maeve Higgins, Barry Ward, Will Forte, and Claudia O'Doherty. It involves a driving instructor, with supernatural powers. She uses these powers to save the daughter of a friend, from a Satanic priest.