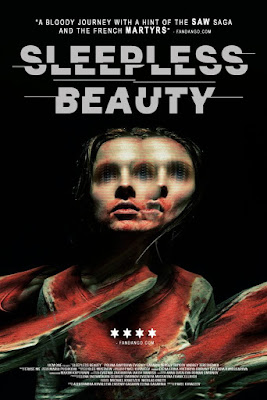 The poster (above) has been released for upcoming Russian torture horror "Sleepless Beauty", described as Saw meets Martyrs. The film is directed by Pavel Khvaleev and stars Polina Davydova, Evgeniy Gagarin, Sergey Topkov, and Andrey Tereshenko. No word on a release date yet.

A young girl named Mila is kidnapped. The unknown abductors keep her in an old garage, talk to her through a loudspeaker and set strict rules: she must not sleep but has to fulfill weird tasks that they’ve prepared for her. It all looks like someone’s sick ideas and gloomy entertainment. Still, the girl doesn’t suspect that she’s part of a ruthless experiment.
Posted by A Southern Horror Fan