“House Of Sweat And Tears” Lands US Digital Release May 20th 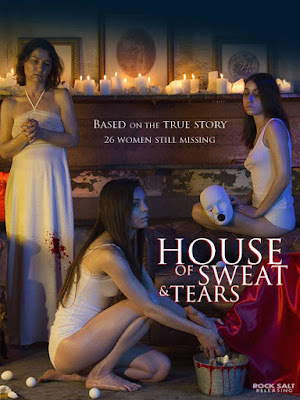 
Writer-Director Sonia Escolano’s eerie ‘HOUSE OF SWEAT AND TEARS’ lands US release date of May 20th.
The rare-female voice in the horror entertainment sphere, Sonia Escolano’s (The Vampire in the Hole, Myna Has Gone, Cinq Minutes), HOUSE OF SWEAT AND TEARS (aka Casa de sudor y Lágrimas) is a mesmerizing exploration of religion, belief and faith. Highly-stylized and bursting with unique shocks, HOUSE OF SWEAT AND TEARS divulges the cults’ struggle to cope with the control, power and ultimate truth of their existence. Shot entirely in candlelight, Escolano’s ominous and mystifying atmospheric horror creates an aura of extreme uneasiness and ultimate fear of the cults lurking in the shadows.
“Writer and Director Sonia Escolano has created a very atmospheric and claustrophobic look into this cult and it is uncomfortable viewing especially for those of us that have subscribed to religion at various times,” wrote Haddon Field Horror.


As a trembling, elevated and atmospheric horror, HOUSE OF SWEAT AND TEARS is based on the tale of a Spanish woman, Luz Amparo Cuevas, from the outskirts of El Escorial, located about 30 miles northwest of Madrid. Luz Amparo Cuevas first saw the Virgin in June 1981, leading to the faith-based phenomenon that united thousands, even after the charismatic leader’s death in August 2012. As a longtime controversy filled with unanswered questions, Telegraph UK reported that The Association of Victims of the Appearance of the Virgin of Dolores has lobbied the Catholic Church to stop the cult, claiming that 26 people have vanished since joining the foundation.
HOUSE OF SWEAT AND TEARS follows “She” (Luz Amparo Cuevas), who assembles the world’s four corners into a violent, religious cult, including human nature’s randomly selected members – Ella (Alzira Gómez), Sophie (Coline Charvin), Emma (Padi Padilla), ​​Jérôme (Pablo Macho) and Ruth (Paula Mateu). Operating under strict sadistic leader, “She” violently tests her followers’ devotion through means of worshiping, fasting or cutting themselves. But when a dark, mysterious man plagues a member’s dream, causing her suicide, will “She” be able to maintain control of the cult? Or, will the mysterious outsider’s arrival set “She” and her followers onto a path of ultimate destruction?
Posted by A Southern Horror Fan