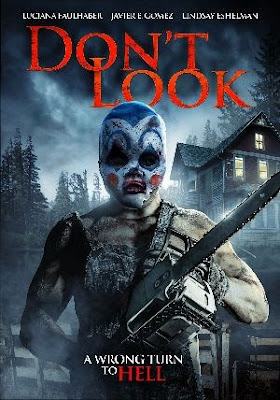 This May, take a wrong turn to hell.
Luciana Faulhaber’s unique, female-directed twist on horror films “Don’t Look” releases on VOD and DVD May 14 from Wild Eye Releasing. Faulhaber stars in the film alongside Jeff Berg, Jarrod Robbins, Curtis K. Case, Lindsay Eshelman, and Javier E. Gómez. The film recreates “the pure fun of 80’s classics like Friday the 13th, The Burning or April Fool’s Day” (Nightmarish Conjurings) with a modern twist.
"Don’t Look” centers on five New York City Millennials who escape the big city for a rustic Thanksgiving weekend in the country. But as will happen in horror, something threatens to shatter their peaceful getaway and they are targeted for murder.
Posted by A Southern Horror Fan