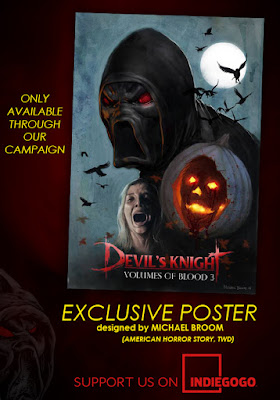 Blood Moon Pictures has launched a crowd funding campaign for the final installment to the "Volumes Of Blood" franchise. The campaign is set up on Indiegogo and .J. Starks and Eric Huskisson have put up some pretty cool perks to gain the 15,000 they seek, including an exclusive poster designed by American Horror Story artist Michael Broom.

Set on the morning of Halloween, several strangers are arrested for their involvement in multiple atrocities across the city of Owensboro. As each is interrogated by police the horrifying reality of their stories unfolds revealing werewolves, killer children, revenge, retribution and the bloody truth about a relentless serial killer who will stop at nothing to make sure he finishes what he started on Devil’s Night.
Posted by A Southern Horror Fan