Gamelion Noumenia: Greek festival honoring all the Gods and Goddesses. Flutes were played; prayers were said; offerings of barley, olive oil, incense, and food were burned in an offering hearth; and libations of water and wine were made. [Gamelion 1] 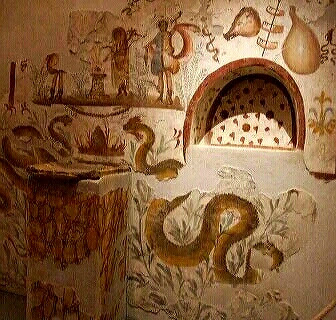 January 6th :
The Noumenia took place when the first sliver of moon was visible. The celebration was held in honor of Selene, Apollon Noumenios, Hestia and the other Hellenic household Gods. The Noumenia was also the second day in a three-day household celebration held each lunar month; Hekate's Deipnon is on the last day before the first slice of visible moon and is the last day in a lunar month, then the Noumenia which marks the first day in a lunar month, followed by the Agathos Daimon (Good Spirits) on the second day of the Lunar month.

Modern revivalists perform many of the same household religious practices and hold the Noumenia as important as their ancient counterparts. They make offerings such as incense or honey cakes to Selene, Apollon, Hestia, and their household Gods at their family altar. Other ways they mark the day include decorating their home or home altar with fresh flowers, eating a special family meal, making honey cakes, and replacing the ingredients in the kathiskos with fresh water, oil, and fruit, and bits of food. The Noumenia also considered an auspicious day to begin new projects.