My Review Of "Snowflake" 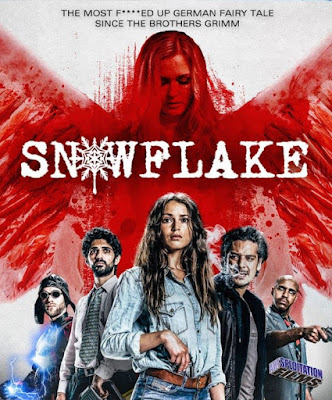 Hunting down the murderer of their families in an anarchic Berlin of the near future, the outlaws Tan and Javid find themselves trapped in the wicked fairytale of a mysterious screenplay that entangles them in a vicious circle of revenge - apparently all written by a clueless dentist.

"Snowflake" is aptly titled, it is a rare and unique film that almost defies label, genre or description. The story is part pulp crime thriller , and part alt comic meta script. As I sat mesmerized by the method , and mesmerizing nature of Kolmerer's storytelling I could only think of a few other times I have watched this kind of cinema- "Pulp Fiction", "Southland Tales" and to some degree "Go".

The story is layered, and ambitious, almost operatic. "Snowflake" gives a story with microcosms of revenge, motive and the mundane. All of which are told in a style that makes each character elaborate and superior. The cast give quality performances and feel authentic in their extravagant nature. Much like each and every character Tarantino creates,  and just like Tarantino,  Kolmerer's feel real.

The special effects are almost non-existent,  and quite frankly irrelevant. People die, little onscreen splatter is celebrated,  but you don't think about that. The cinematography is excellent, the atmosphere is nearly stoic and seems to breathe. The writing is exceptional and creative. "Snowflake" is a wonderfully unique,  conception thriller that just has to be seen. (5/5)
Posted by A Southern Horror Fan