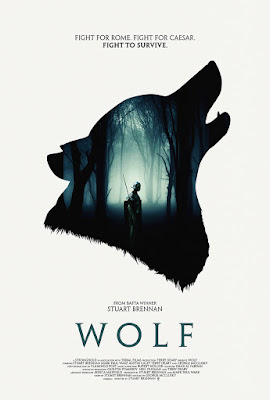 First details have been released for Stuart Brennan's film "Wolf". The period thriller makes its way to the AFM November 1st and stars George McCLusky, Mark Paul Wake, and Adanna Oji alongside Brennan who also stars.

The Romans are at war with the Picts. Hadrian’s Wall is the last outpost of the Roman frontier and a small group of male and female soldiers have left the safety of it to travel North, into Pict territory, searching for four missing men. As winter threatens and no sign of the men, the group prepare to turn home, when they encounter a beast that is hunting them.
With their lives in danger the Romans must either face the beast or turn and run. But can the hunted become the hunters, or will snow and fatigue plague their journey home?
The leader of the Romans admits to knowing there was a sickness that plagued the Pict lands and that the missing men, may well be the very beasts hunting them. Grackus (BAFTA winner Stuart Brennan) has been injured from their first encounter with the beasts and is starting to behave strangely. If it is the sickness, their journey home has just got a lot more difficult…
„Wolf“ is a fast paced action thriller, where no man or woman can be trusted and the beast that hunts them, will not stop until it is dead. Or you are.