A Taste Of Tulip O'Hare 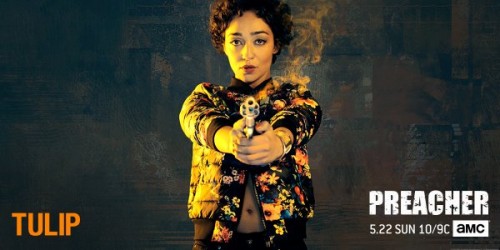 Get a taste of Tulip O'Hare in New 'Preacher' character clip and image. Played by Ruth Negga, Tulip takes aim at AMC audiences on May 22nd at 10/9c. It is a show, and Tulip is a character, that I am excitedly awaiting to watch on the small screen in the coming Sundays!

Based on Garth Ennis and Steve Dillon's acclaimed comic, "Preacher" stars Dominic Cooper as Jesse Custer, Ruth Negga as Jesse's ex-girlfriend Tulip, Gilgun as his vampire friend Cassidy, Colletti as Arseface and Lucy Griffiths as Emily, a character created for the TV show.