My Review Of "Judas Ghost" 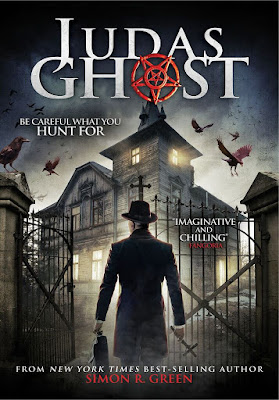 Written by Simon Green and based on his paranormal book series Ghost Finders, "Judas Ghost" is ghost story focusing on paranormal investigators/ exorcists. The film is directed by Simon Pearce. "Judas Ghost" uses a blend of tightly written scenes of drama and dialog with staple CGI effects to kick off the battle between man and supernatural evil picking up within the confines of the novels episodic encounters between the paranormal entity and the vanquisher of ghosts- the ghost finders.

Synopsis: Set in the world of the Ghost Finders, "Judas Ghost" follows a team investigating an apparently standard haunting at an old village hall. The team of three is accompanied by a camera-man and former ghost finder from the Carnacki Institute, who is there to document events as a training tool for new recruits. However, things go from bad to worse when it becomes clear that they are facing something far more sinister than they first anticipated, and the team must use every trick they know to try and get out of the hall alive. Who will survive, and what will remain of their souls, when they encounter the chilling Judas Ghost?

Full disclosure: I have not yet read the Ghost Finders series so my movie review is based solely off what the feature gave me. For me, having not been familiar with the story before hand, I feel that a lot about these characters and this "VS evil" mythos, that Simon Green has created, could have been anchred in "Judas Ghost" with a bit more backstory. Still based on the plot and well crafter melodrama here, "Judas Ghost" is an intense kick off for the film franchise. The dialog was quick, intelligible back'n'forth that developed an intense, and often times, thrilling experience.

The cast are pretty committed to these characters and each one is fully developed and individualized enough not to seem disingenuine or forced into the story. The cliche arrogance of the main character is a bit of a bitter pill but even he feels authentic in this supernatural mythos, "Judas Ghost" provides. The story does drag some during dramatic moments, this is simply due to the lack of variety in scene setting and plot. The whole story takes place in a single location with almost no nreakway moments to stimulate the viewer and very little chilling horror or gore to solidify the dark tone of "Judas Ghost".

The special effects are your run of the mill CGI driven ghosty stuff that is both overworked, and understandably necessary to tell a story such as " Judas Ghost". Although I personally wanted more moments that ramp up the suspense and provide possible shock value to the horror side of the story, Simon Pearce does a good job of managing the use of CGI and other effects perfectly and effectively so "Judas Ghost" does give good Ghost! Overall this film is deserving in a once over by horror fans, especially those really into the Ghost hunter flicks, and is a great way to kick off the feature franchise for Ghost Finder fans.