My Review Of “Rigor Mortis” 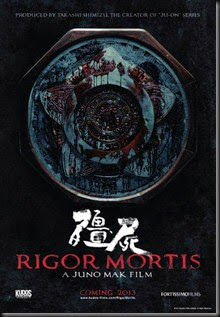 “Rigor Mortis” is Hong Kong’s call-back to new resurgence of horror/fantasy. Billed as a feature film inspired by a popular the popular Vampire films of the 80’s. this movie gives us a dark, wondrous nightmare. Starring Anthony Chan, Siu-Ho Chin, Kara Hui, Hoi-Pang Lo, Richard Ng, and Hee Ching Paw. The plot revolves around an ex actor on a downward spiral, longing for death, who moves into an apartment tower where realm of supernatural and humanity are entwined.

“Rigor Mortis” offers a fantastical fantasy world of horror, drama and Hong Kong action. The story is multi-layered with lives tangled in a hellish fate. There are elements of melodrama and gore that move in a wonderful ballet of emotion and carnage. I feel that the story works as a modern retelling of some ancient Chinese fable, the concepts and character development seem so complex and powerful that it just screams of morality wisdom from the past. Either way it is a tale that embraces both the old supernatural beliefs and contemporary style that proves Hong Kong’s dominance over this blended fantasy/horror genre.

The special effects and soundtrack utilized in “Rigor Mortis” is top notch. The sounds are creepy, often creating a dark atmosphere of desperation scene after scene. The sets where depressing, lifeless tombs of fading lives that would send chills up Takashi Shimizu and Clive Barker’s backs. “Rigor Mortis” uses some pretty spectacular CGI and practical effects for the fantasy and horror elements. Epic visual moments weave into the film in true whimsical opulence while the blood soaked gore combined with the chilling horror scenes create a nightmare fantasy that captivates and entertains. Just based on “Rigor Mortis” as an independent entity untethered from it’s inspiration, homages and such I found this to be one of the best horror/fantasy films that I have ever seen. “Rigor Mortis” is Juno Mak’s masterpiece and a must see film!
Posted by A Southern Horror Fan