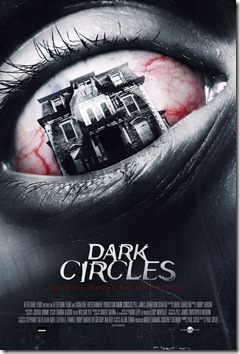 “Dark Circles” is an obvious knock off of The Amityville story but then again just about every horror film is in some ways a knock off of some other story that came before. So with that point pushed aside check out the trailer for this After Dark film. Directed by Paul Soter and starring Pell James, Jonathan Schaech, Philippe Brenninkmeyer, Andrea Frankle and Michael Patrick Rogers.

When new parents Alex and Penny retreat from the city and move into a place outside town, the stress and massive sleep-deprivation caused by their infant has both of them seeing things in the house that may or may not exist. Persistent sightings of a strange woman has each of them wondering if they are suffering from hallucinations, or if their new home holds a dark, supernatural presence. As their fragile grasp on reality spirals into delirium, Alex and Penny find themselves nearly helpless to deal with the horrific truth of what is really going in this house.