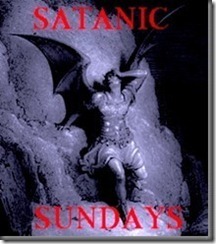 Here are six films to remind us all of the darker side of Sunday. The reverse of all that is holy is of course unholy.We live in a world driven by like minds gathering for a greater and sometimes sinister cause and if you listen to conspiracy theorists our world is plagued with cults who rule the world. So on this Satanic Sunday why not check out some cinematic trash that explores the minds and personalities of evil cults bent on chaos and darkness.

Directed by Robert Findlay and starring William Beckwith, Tim Gail, Christine Moore, Max Jacobs and Mavis Harris. A Satanic offshoot of the Catholic church has been operating since the 1500s, led by a renegade priest named Thomas Seaton (William Beckwith). The members can earn immortality if they sacrifice a blood relation every 13 years, and soon it will be time for George Parkman (Max Jacobs) to renew his bond with Lucifer. Parkman's intended victim is his virginal granddaughter Alexandra (Christine Moore), though her fiancé Bill (Tim Gail) is suspicious of the intentions of the old man and his lecherous friend Father Seaton. Oblivious to the danger, Alexandra rejects Bill's concern as jealousy. After her mother dies under suspicious circumstances, Alexandra moves in with her grandfather and falls further under the evil priest's spell, never suspecting that she's being prepared for a Winter Solstice sacrifice to Satan. However, the Catholic church is aware of the sinister cult's plans and a young nun has infiltrated their ranks in an effort to smash their blasphemies once and for all.

Built more on suspense and audience imagination than on cheap thrills, genre-cliches, and gore, this Canadian horror movie centers on the evil doings of a murderous demon and the determination of a courageous priest (Michael Rooker) to stop it. The smoke-like demon arises from the netherworld in response to a satanic ritual held in an empty warehouse. The priest showed up in time to destroy the worshipers but not soon enough to stop the devil's minion from escaping into the city's labyrinthine sewer system. Travelling underground, the demon eventually resurfaces in Grand River, a peaceful little town. Meanwhile, the priest investigates the bodies of the dead satanist and on one of them finds papers that lead him to a young boy in the aforementioned town. This fatherless child has been divinely marked for greatness, and the demon has been called forth to destroy him, but before he can, the creature must consume large quantities of human blood to build up its power. His presence and the rising body count drives the locals insane, something that only hinders the priest on his desperate quest to save the child and return the demon to his fiery domain. Directed by Jamie Dixon and starring Michael Rooker, Tony Todd, Leslie Hope, Shawn Thompson and Andrew Jackson.

Directed by Pece Dingo and starring Lisa Hart Carroll, Michael Des Barres and Paul Drake. A horror film set in a New York nightclub, Midnight Cabaret is the story of an actress (Laura Herrington) suspected of killing several of her cast-mates. The police investigator assigned to the case (Bruce Wright) finds that the truth involves a Satanic cult trying to bear the Anti-Christ.

A public relations firm is really a front for a devil-worshiping cult that kidnaps young models to sacrifice to the devil. A reporter stumbles onto their operation. Directed by Mark Burchett, Michael D. Fox and starring Paul Morris, Amber Newman, Debbie Rochon and David A. Levy.

Four unknowing college students stumble upon a deadly group of drug-fueled cultists in the low-budget shocker, Dark Night of the Soul. Headed by a psychopathic rejected cult leader in a skeleton mask, Shawn, the students soon find themselves in a hedonistic nightmare full of sex, drugs, and brainwashed followers. The film has been rumored to feature actual demonic conjuring along with a curse that has hung over the cast and crew since production -- a familiar form of hype that has been used in low-budget horror marketing for decades. Directed by Ron Atkins and starring Michelle Cantwell, John Brodie, Helena Vaughn and M. Lagner.

Directed by Jeff Hathcock and starring Mark Blanchard, Douglas Dunning,  Bo Hopkins and Rick Hill. Sheila Caan is menaced by Satan worshipers on her journey from Brooklyn to Las Vegas. In an effort to find out what happened to her twin sister, she undergoes many treacherous journeys, a number of Satanist slayings, and a number of showers. 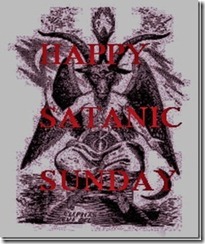