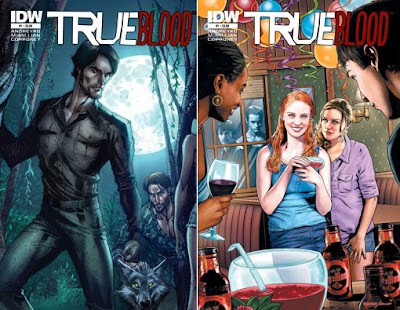 Michael McMillian, is also a co-author (alongside Marc Andreyko) of the second series of comics.
Here, McMaillian gives us some scoop on the forthcoming graphic novel.
“The plot kicks off when bottles of Tru Blood are contaminated with this mysterious ingredient that makes vampires go, basically, insane,” McMillian reveals. “They go crazy. They lose sense of all sort of moral center, and they pretty much go feral and attack anything and everything in sight. What happens is they reach Bon Temps and the lips of a very beloved vampire character. Sookie and the rest of the characters are trying to figure out: Who’s behind the contamination? How can they save their friend? That’s sort of where the whole arc starts off.”
And McMillian continues: “We wanted to make this story very vampire-centric, and I’ve always been interested in the larger mythology of this bottled blood, that there’s a corporation behind this. What would happen if they had a PR disaster like the BP oil spill or the contaminated Tylenol pills? When their customer base is vampires, if something went wrong, it would be a huge disaster. What happens if they have to pull bottled blood off the market? What will vampires do? I thought it’s a bit cheeky, but the timing to do a story like this is right. There’s the immediate problem of: If something like Tru Blood is recalled, what are vampires going to do? What does that mean for humans? I’m interested in the dynamics of the relationships between humans and vampires.”
Posted by A Southern Horror Fan