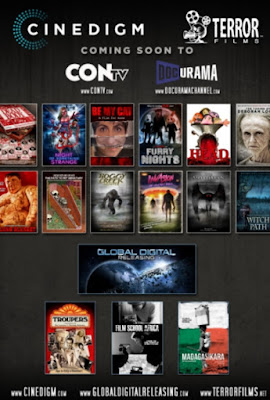 Terror Films and Global Digital Releasing are kicking off 2020 with a new partnership and have teamed with Cinedigm to place content across their popular ad-based platforms: CONtv and Docurama.

Terror Films President Joe Dain stated: “we are thrilled to be working with Cinedigm and their network of popular AVOD channels." Dain also mentioned the popularity of online Digital platforms: “in today’s growing subscription-based environment, we’re seeing an explosion of consumers turning to free, commercial based platforms. This is a great opportunity for us to continue our goal of expanding the digital footprint of our library while creating new revenue opportunities for our filmmakers.” Terror Films continues to partner with innovators in the online film marketplace.
Cinedigm is a leader at the forefront of the digital transformation of content distribution. They have adapted rapidly to the transforming business needs of today’s entertainment landscape while remaining a change-centric player focused on providing content, channels and services to the world’s largest media, technology and retail companies. Cinedigm provides curated original and aggregated programming that entertain consumers globally across hundreds of millions of devices.
The initial launch will consist of 15 movies between two labels. The first films to debut at Cinedigm include: the terrifying possession film The Taking of Deborah Logan from director Adam Robitel, the critically acclaimed Romanian film Be My Cat: A Film for Anne the fan favorite documentary Unearthed & Untold – The Path to Pet Sematary, detailing the journey of Stephen King’s hit film from novel to script to screen and the award winning, inspirational documentary Film School Africa – among others.
A complete list of the films, which will begin to go live later this year, can be seen in the attached promotional banner.
To learn more visit:  www.terrorfilms.net
www.globaldigitalreleasing.com
www.cinedigm.com
www.docuramachannel.com
www.contv.com