My Review Of "Debunkers Inc" 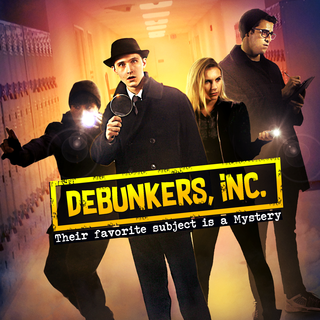 The Debunkers are a band of amateur detectives who will do anything to become heroes (and make a buck while they’re at it), the self-proclaimed “premiere Mystery Debunking business in the state of California. These boys are willing to fake it till they make it, and so far they’ve solved only a handful of petty mysteries, but they’re about to get the assignment of a lifetime.

"Debunkers, Inc" is very family friendly. The thought that kept coming to mind was that - this film reminds me of the Saturday series 'The Inspectors' about college kids interning for the Inspector General's office of the Postal Service- or something like that. Only in style, campiness and very soft drama. Only with "Debunkers, Inc" there is a direct link to the Scooby Doo concept.

The story and overall intend is a cute, simple adventure mystery with an element of paranormal activity which sets up this group of high schoolers for a chance to show their skills. It's murder mystery in a very benign way, There is no violence and the film never gets anywhere close to thriller territory. It is all mid-morning weekend i/e approved.

The acting is disjointed and a bit too theatrical, which if the whole concept would have been to go camp, would have been okay. But the supporting cast and a lot of the situational stuff stays bland and straight which creates a clunky, disenchantment air that causes the entertainment value to struggle to take off. Overall "Debunkers, Inc" is only going to appeal to a small, select audience. Like I said, that weekend mid-morning kiddie crowd. Unfortunately though, the movie never reaches it's inspired target as Scooby approved. (2.5/5)
Posted by A Southern Horror Fan