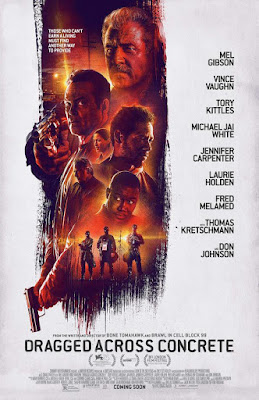 A new trailer has been released for action thriller "Dragged Across Concrete". The film stars Vince Vaughn and Mel Gibson and arrives in theaters and on demand on March 22nd. It is directed by S. Craig Zahler and costars Tory Kittles, Michael Jai White, Jennifer Carpenter, Laurie Holden, Fred Melamed, Thomas Kretschmann and Don Johnson.

Dragged Across Concrete centers on two police detectives who are suspended from the force after a video of strong-arming a suspect is leaked to the media. With little money to their names and no other place to turn, the frustrated officers take a turn into the criminal underworld, ultimately finding more than they bargained for waiting for them in the darkness.