My Review Of "Cargo" 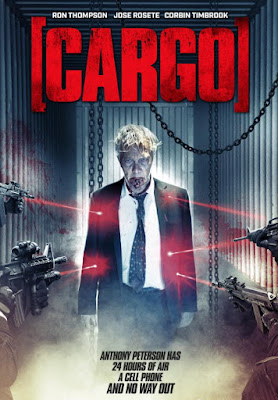 "Cargo" is a James Dylan film starring Ron Thompson, Corbin Timbrook, Jose Rosete and Danika Fields. The film is framed as a taught thriller inspired by such films as "Saw" and "Buried". Anthony Peterson has 24 hours of air. A cell phone. And no way out.

A man wakes trapped inside a cargo container with only a cell phone and is given 24 hours by his kidnappers to raise ten million dollars in ransom or die.

The story is a high concept suspense told in a minimalist, claustrophobic manner. The idea is familiar and novel. Dylan plays on those familiar tropes with creativity and style. The dark,  often close-framed shots create an atmosphere of suspense and tension. It gives a physical representation to the dire circumstances and loss of control both in situation and emotion.

The single actor drama is a risky choice that can, at times, seem tedious. Putting more constraint on the ability for an organic flow. And for the most part "Cargo" falls into this trap. The unseen antagonist offers some relief,  providing a catalyst for both the story motion, and the character study. However the execution of the one-man show often feels forced and looses momentum periodically. Not by any fault of the actor, Ron Thompson, he gives a great performance.

The cinematography is quality, keeping the scenes, and setting interesting throughout the movie. The soundtrack is also good and seems to compliment the journey of this tortured, kidnapped  (bad man). Still at times "Cargo" did loose my attention,  and to finish did require dedication. Check it out but the high concept and uniqueness will only really speak to a select audience. (2.5/5)
Posted by A Southern Horror Fan