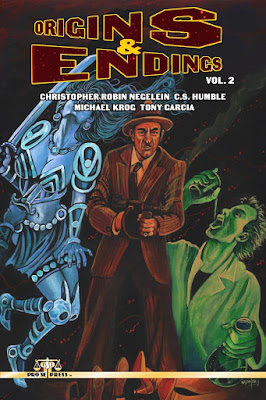 A cutting edge Publisher of Genre Fiction and New Pulp, Pro Se Productions is known for publishing works that take a particular concept and push it to its limits. The latest release from Pro Se is no different, a second volume of two focusing on two of the most popular stories in any character’s canon-the first and the last. ORIGINS AND ENDINGS VOLUME TWO is now available in print and digital formats.
“It’s not often,” says Tommy Hancock, Editor in Chief of Pro Se Productions, “that we have a collection that demands two volumes that come out nearly at the same time. The response to ORIGINS & ENDINGS, however, demanded just that. This two book collection illustrates an interesting dynamic, showing of course the differences, but also amazingly the similarities in both types of tales. Origins and endings share a lot of thematic ties and the authors in this two volume collection show that extremely well.”
Every Story Has A Start and Finish. And, for every story, those are two different tales. One of Origin, of birth and promise. Of beginning something and the beauty of the path it will follow. And One of Ending, of finality and completion. Of laying to rest all that had been before one last time.
ORIGINS & ENDINGS VOLUME TWO set of such stories as written by some of today’s best Genre Fiction authors, including C. S. Humble, Christopher Robin Negelein, Tony Garcia and Michael Krog. Some tales are the opening of a great salvo, of action and adventure yet to come and others are the last note, the ringing knell of legends and secrets passing away.
Watch heroes and villains discover themselves while adventurers and explorers give their all to be who they are. ORIGINS & ENDINGS VOLUME TWO. From Pro Se Productions.
With a thrilling cover by Larry Nadolsky and logo design and print formatting by Antonino Lo Iacono and Marzia Marina, ORIGINS & ENDINGS VOLUME TWO is available now at Amazon at https://www.amazon.com/dp/1541117824/ref=sr_1_4… and Pro Se’s own store at www.prose-press.com for 10.00.
The second volume of first and last stories is also available as an Ebook, designed and formatted by Lo Iacono and Marina for only $2.99 for the Kindle at https://www.amazon.com/dp/B01NBNRAKJ/ref=sr_1_3… and for most digital formats via Smashwords at https://www.smashwords.com/books/view/691655.