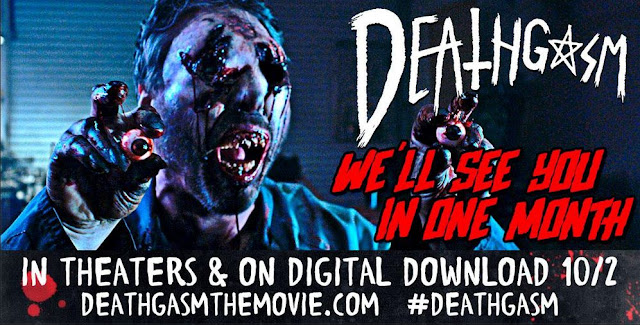 The official trailer has been released for Jason Lei Howden's "Deathgasm". The film lands in one month! That is October 2nd, 2015. "Deathgasm" stars Milo Cawthorne, James Blake, Kimberley Crossman, and Stephen Ure.

Highschool can be Hell. Metal-thrashing Brodie is an outcast in a small town until he meets a kindred spirit in metalhead Zakk. After starting their own band, Brodie and Zakk’s resentment of the suburban wasteland leads them to a mysterious piece of sheet music said to grant Ultimate Power to whoever plays it. But the music also summons an ancient evil entity known as Aeloth The Blind One, who threatens to tear apart existence itself. It’s up to Brodie, Zakk and their mates to stop a force of pure evil from devouring mankind.