My Review Of "Reunion" 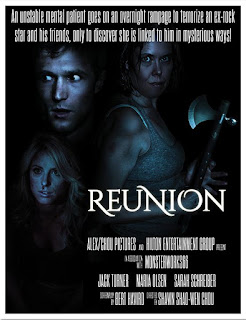 Shawn Chou directed "Renunion" is a modern day nightmare about an ultimate mother from hell. It is a psychological horror both atmospheric and dramatic. "Reunion" stars Maria Olsen, Jack Turner, Cara Santana, Sarah Schreiber, Reign Morton, Ruth Reynolds, Christopher Wolfe, Lucas Barker, William Leon, Arrielle Brachfeld, Leif Gantvoort and Matthew Jaeger. The logline reads: "An unstable mental patient goes on an overnight rampage to terrorize an ex-rock star and his friends, only to discover she is linked to him in mysterious ways."

Synopsis: Mia is a mental patient haunted by a disembodied voice who claims to know how to find her missing son. She escapes from the psych ward where she resides, assuming that her child is being held captive at a house occupied by an ex-rock star, Brad, and his friends. Convinced that Brad is her estranged husband responsible for abducting her son, Mia imprisons him and his friends in the house, forcing them into an inescapable nightmare filled with horrifying consequences. As the night progresses and the body count rises, Brad and Mia unearth a dark connection between them that will alter their lives forever.

"Reunion" is tense, suspenseful horror story that digs up personal emotion, cradled in nightmares of a darker past that when revealed rips at the heart of domestic, and familial fears. Cryptic I know! Lets just say that Bert Havird fuses classic slasher concepts with more psychological thriller aspects that are build on shattered family and a lost past. When it unfolds to reveal that relationships of these tragic characters, the story goes dark, and full speed into intense thriller mode. Elements of the story reminded me of Jonathan Darby's writing on "Hush" , and at moments there is a mash-up of emotion and energy that made me think of "Hand The Rocks The Cradle" writer Amanda Silver. Except this is a more contemporary nightmare closer to slasher cinema than your basic psychological thriller.

The special effects are a blend of gory, bloody slice'n'dice practical effects, and surreal like atmosphere with a very visceral component that really gets in good with the gruesome nature of the story and the fate of these characters. The soundtrack is mix of macabre sound effects and indie music that give "Reunion" a nice balance between the dramatic scenes, and the more gruesome ones. It is very complementary to the overall attitude, and almost romantic vision of terror that Chou offers up. Romantic not in the style of story but in the love that is apparent between Chou, Havird, and the cast chosen style of telling this very intense, organic nightmare. Overall I think "Reunion" is a great indie horror with heart, depth, and intensity. It isn't full on slasher, gorefest but considering the last half of the story and the touching, emotional past of the mother and son's lives, it is very compelling to say the least. Check it out!