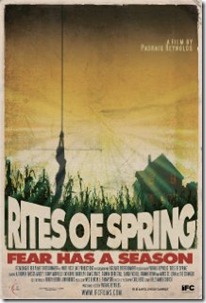 Padraig Reynolds’s “Rites Of Spring” is one big one hell of a story. Well actually the film is two stories that build as steady dramatic storms before converging into one monstrous maelstrom of a nightmare. The film stars AJ Bowen (House Of The Devil, A Horrible Way To Die), Anessa Ramsey (Footloose, The Signal), Sonny Marilnelli (ER, The Fallen Faithful), Katherine Randolph (Jarhead), and Marco St. John (Treme, Monster) and follows a group of kidnappers looking for a ransom that inadvertently lead themselves into the path of a psychotic some-what supernatural killer unleashed by a farmer’s ritual human sacrifice. Yeah I know, that is an epic set up right!. Not only that but of coarse as always a couple of the kidnappers have other plans for the money situation as the story unfolds. But I don’t want to give out a definite spoiler moment of the film.

For me “Rites Of Spring” almost fails by bringing the two stories slowly together. At times you think “what the fuck- quit changin’ up the story”. It is a knee-jerk reaction when watching a film that bounces between story lines alternating scenes from the beginning. This almost makes the interest and build of the film seem pointless and boring. Don’t give into any impulse you may have to step away from this film though. It would be a mistake because this film soon lives up to the title and the horror implied within.

Just as in life there is no slow set up to a situation you may face or walk into, so to is how this film begins. The story starts as if we were always watching these characters lives with the plot already in motion. It doesn’t stop in the steady intense build from the beginning until the final moments with the scene freezes and the credits role. The movie takes place in a small town with little going on. However in this town there just happens to be a family that gives human sacrifice for prosperity of crops in the coming year. A ritual blood offering to a crazed psychotic slasher that may or may not be supernatural. There is no real detail to the origin of the monster in this film.

When the lives crash into one another the darkness intensifies and you almost hold your breath in anticipation of what will happen next. There are some pretty intense moments that give fright as they characters are cut down gruesomely one by one. When the action and horror unfolds it is sudden and none stop right up until the last scene. Then the film ends just as quick as it began with no real finish or conclusion. The story or stories as I should say at first seem scattered and confusing but before it can bother you much the plot unfolding on screen seems to hold you long enough for the nightmare to begin. I really enjoyed this film and can’t wait for another ritual sacrifice to bring on a new spring. In other words I hope there is a sequel to this movie.
Posted by A Southern Horror Fan